The Government will freeze planned RPI duty rises for spirits, beer and most cider. Duty on most wine and higher strenght sparkling cider will rise by RPI inflation (3.1%) from 1st February 2019.

Miles Beale, Chief Executive of the WSTA said:
“We welcome the Government’s decision to freeze duty on spirits, which will support this great British sector to invest, grow and create jobs – as well as supporting the public finances through
increased revenues. However, the decision by the Chancellor to increase wine rates significantly is a hammer blow to this great British industry. It actively undermines a sector that has been hardest hit since the Brexit Referendum and will be thoroughly unwelcome for the 33 million consumers of the nation’s most popular alcoholic drink.
This inflationary rise is grossly unfair, unjustified and counter-productive. The UK is the world’s biggest wine trading nation and, as such, deserves government’s support, not punishment.
The wine industry is, unfortunately, no stranger to harsh treatment from Chancellors. Since 2012 wine overtook beer as the largest contributor to the public purse through duty payments, and
no alcoholic drink has paid more to the Treasury since then. Today’s announcement means that only twice since 2003 that Chancellors from either party have showed their support to an industry
employing some 190,000 people across the country. By increasing the UK’s already excessive duty rates the Chancellor will clobber wine importing businesses, including thousands of SMEs; stifle growth of our flourishing English wine industry and; raise prices for consumers.” 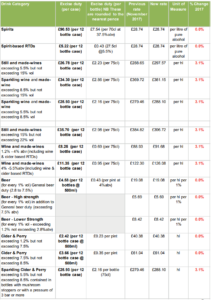 The Chancellor announced a range of other business related matters including: